THIS is a strange time for supplement-makers. From one angle, the industry’s prospects look bright. Demand is rising for products that promote health “naturally”. Supplement-makers have just the thing, or rather, things: some 85,000 pills, powders and elixirs in America alone. They will be touted at the Natural Products Expo East, a big convention this week in Baltimore. Among the exhibitors are Solgar, with a vegetable pill that “increases mobility, flexibility and range of motion in sensitive joints”, and Emergen-C, with a powder that “may help support a healthy heart” and “support your immune system”.

Between 2009 and 2014 worldwide sales of supplements like these grew more than 50% faster than those of over-the-counter drugs, reaching $88 billion, according to Euromonitor, a market-research firm. That is a boon for many small producers—the industry is fragmented—and a few big ones. Otsuka Pharmaceuticals of Japan owns Pharmavite, which churns out 15 billion pills a year. Pfizer and Bayer, pharma giants from America and Germany, are each big peddlers of multivitamins. Mylan, a drugs firm, is trying to acquire Perrigo, whose products include vitamins and “probiotics” (products containing live, and beneficial, bacteria and yeasts).

In 2010 the Carlyle Group, a private-equity firm, paid $4 billion to buy NBTY, which controls brands such as Solgar. Other industry titans include multilevel marketers, such as Amway and Herbalife, whose recruits not only peddle their products, but enlist other sellers.

Looked at in another light, however, the industry seems besieged. Concerns abound over the veracity of the claims it makes. America’s justice department has accused Bayer of illegally promoting the effect of its probiotic, a collection of bacteria that it says “support digestive health”. A court ruling is imminent. On September 21st America’s Federal Trade Commission will hold a meeting to scrutinise adverts for homeopathic products.

Worries over safety are graver. On September 1st America’s Food and Drug Administration (FDA) sent warning letters to firms selling pure caffeine, one teaspoon of which has as much of the stuff as 28 cups of coffee. In April the FDA warned several firms that they had illegally dubbed as “supplements” products that contain BMPEA, a stimulant similar to amphetamine. And regulators are not the only ones watching the industry. Numerous lawsuits are in the works, on everything from allegedly dangerous diet pills to protein powders said to lack protein.

In the face of such attacks, however, the industry has a good immune system of its own. Supplements boast a unique trifecta: lax regulation, potent marketing and millions of credulous consumers keen to pin their hopes of a healthier life on a pill. “It’s an industry that has proven time and again that it is very resilient,” says Mike Archbold, boss of GNC, a vitamin retailer.

America is the industry’s honeypot, thanks to loyal consumers and uniquely helpful regulations. Though growth has slowed, supplement sales reached a record last year of $25 billion, according to Euromonitor. The Nutrition Business Journal, which defines the sector more broadly, puts the figure at $37 billion (see chart). 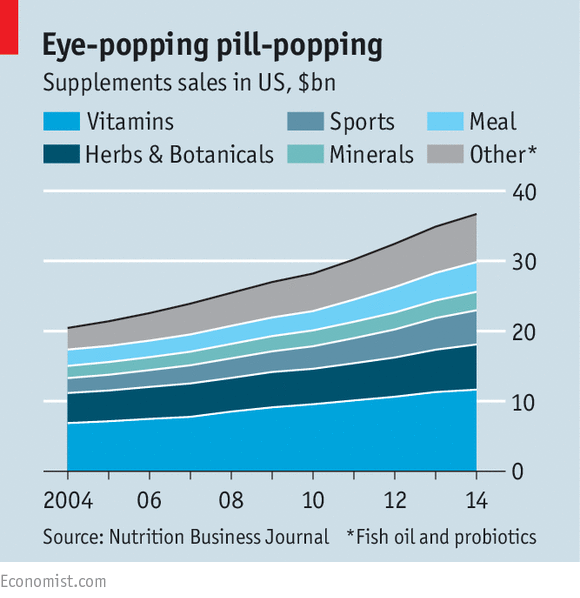 The country’s craze for supplements, as recounted in “Vitamania”, a book by Catherine Price, started in the 1930s and 1940s. Pills containing vitamins—chemicals that perform vital functions in the body—were seen as a way to boost soldiers and workers alike. Once vitamins could be synthesised in factories rather than extracted from nature, they became cheaper and more widely used. From the 1970s Linus Pauling, a Nobel prize-winner in chemistry, argued that vitamin C could prevent colds and cure cancer (it can’t).

Strangely, it was regulations which gave the industry its biggest lift. In the 1990s the FDA considered new rules for supplements’ health claims. “It set off a firestorm,” remembers David Kessler, the FDA’s commissioner at the time. “The industry understood there were billions of dollars at stake.” Lobbyists framed the issue as one of personal liberty. Bureaucrats would rob Americans of both vitamins and the freedom to care for themselves.

The result was a law that covered not just vitamins and minerals, but botanicals, amino acids, enzymes, metabolites and pills made from animal organs. The 1994 law let firms sell supplements without requiring the FDA’s approval for safety or efficacy. It also, for the first time, authorised firms to tout health benefits. They cannot claim that their pills can diagnose, prevent, treat or cure a disease, but they may make vague claims that it “supports a healthy heart” or is “essential for strong bones”, and so on. As a result, rather than restrain the firms, the law unleashed them. There are more than 20 times as many supplements on the market as there were in 1994.

Critics such as Paul Offit, of the Children’s Hospital of Philadelphia, argue that the rules fail to ensure safety or efficacy. First, safety. The rules on manufacturing standards apply to the supplement-makers, but not their suppliers. There is no cap on the amount of nutrient that a pill may contain. The FDA’s powers over products on sale are anaemic. To ban a product, it must prove that it is unsafe. It took seven years for the agency to piece together evidence that certain diet pills caused liver disease. Given the FDA’s limited role, many firms hire consultants to check their products’ quality. Others do not.

Earlier this year New York’s attorney-general charged that many supplements did not contain what they claimed, although some argue the state’s tests were faulty. Other studies have also found problems. When ConsumerLab.com, an independent outfit, tested 42 multivitamins, 16 failed, mainly for having either too much or too little of a nutrient.

Other cases are more serious. Last year an infant died from a contaminated probiotic. In 2013 a vitamin B pill was found to contain steroids: women reported facial hair and missed menstruation. That year consumers on a diet product called OxyElite Pro began to develop acute hepatitis. Nearly 50 people went to hospital; at least three had a liver transplant and one died.

The question of efficacy is just as thorny. Under the 1994 law, firms must have some substantiation for the claims they make, but they do not have to file it with the FDA. When a government auditor reviewed some firms’ evidence in 2012, one firm cited an old, handwritten college essay. Others offered links to Wikipedia.

Sceptics question if many supplements are worth buying. A few products have some evidence behind them, such as folic acid for women planning to become pregnant and vitamin B12 for the elderly. A study published on September 14th linked low levels of vitamin D to cognitive decline, though there is no evidence yet that supplements can solve the problem. Steve Mister of the Council for Responsible Nutrition, a lobby group funded by supplements-makers, argues that since many Americans eat unhealthily, supplements therefore fill a need.

But it is difficult to discern many supplements’ benefits, says Paul Coates of the National Institutes of Health, a government agency. In a drug trial the control group takes no medicine. In a study of a vitamin, the control group still ingests various levels of that vitamin from food. That makes it harder to judge the effect of a supplement.

The evidence that does exist is mixed. Some botanicals, such as ginkgo, show no effect in large studies. Others, such as St John’s wort, can interfere with blood thinners. When researchers tested if a precursor to vitamin A cut the risk of cancer among smokers, they found that supplements seemed to increase it. In 2011 a study found that men taking vitamin E were more likely to get prostate cancer than those on a placebo. Two studies suggest that multivitamins may lower the risk of cancer in men; another suggests they may reduce heart-disease deaths in women. But in 2013 a trio of papers reported that multivitamins showed no effect on heart disease, cancer, cognitive decline or death.

There are some signs of weakness in the industry. American supplement sales grew more slowly in 2014 than at any time since 2002, according to Euromonitor. But in general firms don’t seem to be fazed by the negative attention, for three reasons.

First, further regulation is unlikely. Bills to improve oversight have never got anywhere. The FDA is unlikely to use even its existing powers. The Council for Responsible Nutrition has a $6m budget to boost its members’ interests. The FDA’s Division of Dietary Supplements has $5.2m to police the entire industry. Its strongest boss to date was a former supplements lobbyist who has since returned to lobbying.

The stimulant BMPEA illustrates the agency’s limits. The FDA knew in 2013 that some products contained it, but did not issue warnings to manufacturers until April. The inaction may have been due to conflicts of interest. More likely, the agency had too many tasks and no cash. Nearly five months after sending its warning letters, the agency cannot confirm that products with BMPEA are off the shelves.

Second, firms are expert at bouncing back. A negative scientific paper can hurt sales, according to Simeon Gutman of Morgan Stanley. A study on the risks of excess vitamin D, for example, helped depress sales growth from 16.7% in 2011 to 1.3% in 2012. But it rebounded to 9% in 2013. And if one particular product does not make a comeback, companies offer a new one. “You’ve always had something else that comes along,” says Mr Gutman.

Third, and most importantly, Americans love taking supplements. About half of them do so regularly. They take them for all sorts of reasons—their bones, their hearts, their minds—but mostly for that holy grail of general health. That is not so surprising. Not only are firms good marketers, but conventional health care is expensive and vexingly complex. Supplements let patients take charge of their health. And then there is the placebo effect, the brain’s response to the belief that a given pill will help, which scientists agree is real.

The industry’s gravest threat may not be regulators or huffy academics, therefore, but a simpler foe. Consumers are increasingly keen on natural and organic foods. Last year sales grew by 12.7% compared to supplements’ rise of 5.1%, according to the Nutrition Business Journal. But supplement makers are already adapting. GNC has launched “whole-food-based sports nutrition products”. Last year Pharmavite bought FoodState, which makes vitamins from “fresh and local foods”. Consumers could simply cut out the middleman by eating decently, but the makers of the supplements have good reason to hope that they will not be so sensible.

From the print edition: Business