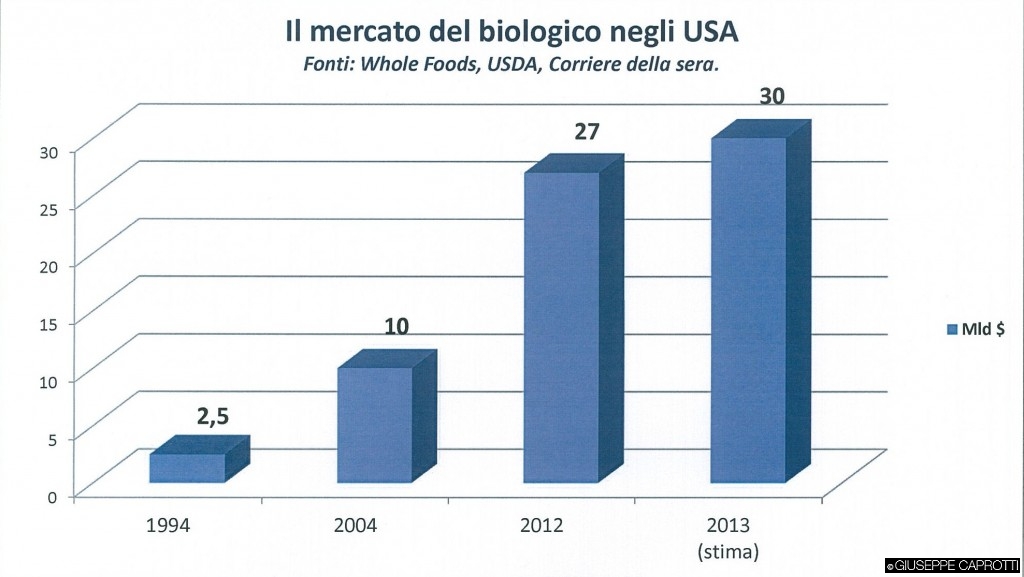 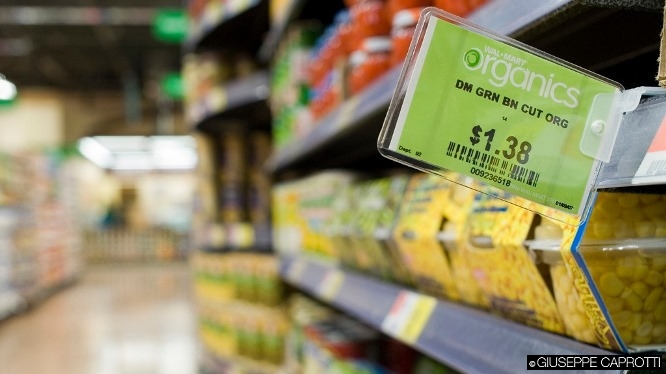 USDA does not have official statistics on U.S. organic retail sales, but information is available from industry sources. U.S. sales of organic products were an estimated $28.4 billion in 2012—over 4 percent of total food sales—and will reach an estimated $35 billion in 2014, according to the Nutrition Business Journal.

Fresh fruits and vegetables have been the top selling category of organically grown food since the organic food industry started retailing products over 3 decades ago, and they are still outselling other food categories, according to the Nutrition Business Journal. Produce accounted for 43 percent of U.S. organic food sales in 2012, followed by dairy (15 percent), packaged/prepared foods (11 percent), beverages (11 percent), bread/grains (9 percent), snack foods (5 percent), meat/fish/poultry (3 percent), and condiments (3 percent).

Most organic sales (93 percent) take place through conventional and natural food supermarkets and chains, according to the Organic Trade Association (OTA). OTA estimates the remaining 7 percent of U.S. organic food sales occur through farmers’ markets, foodservice, and marketing channels other than retail stores. One of the most striking differences between conventional and organic food marketing is the use of direct markets—Cornell University estimates that only about 1.6 percent of U.S. fresh produce sales are through direct sales. The number of farmers’ markets in the United States has grown steadily from 1,755 markets in 1994, when USDA began to track them, to over 8,144 in 2013. Participating farmers are responding to heightened demand for locally grown organic product. A USDA survey of market managers (see Organic Produce, Price Premiums, and Eco-Labeling in U.S. Farmers’ Markets, April 2004) found that demand for organic products was strong or moderate in most of the farmers’ markets surveyed around the country, and that managers felt more organic farmers were needed to meet consumer demand in many States.

Over the last decade, USDA’s Agricultural Marketing Service (AMS) has expanded wholesale price reporting for organic fruits and vegetables, and added new price reports on organic grains, poultry and eggs, and sales volume for milk. Prices for organic products continue to be higher than for their conventional counterparts.

ERS analyzed organic prices for 18 fruits and 19 vegetables using 2005 data on produce purchases (see Emerging Issues in the U.S. Organic Industry, June 2009), and found that the organic premium as a share of the corresponding conventional price was less than 30 percent for over two-thirds of the items. The premium for only one item—blueberries—exceeded 100 percent. In contrast, in 2006, organic price premiums for a half-gallon container of milk ranged from 60 percent for private-label organic milk above branded conventional milk to 109 percent for branded organic milk above private-label conventional milk.

Numerous studies have been conducted on the buying habits and demographics of consumers of organic foods. Results have varied depending on the type of survey, sample size, and geographic coverage. However, a few general themes have emerged.

Consumers prefer organically produced food because of their concerns regarding health, the environment, and animal welfare, and they show a willingness to pay the price premiums established in the marketplace.

Organic products have shifted from being a lifestyle choice for a small share of consumers to being consumed at least occasionally by a majority of Americans. National surveys conducted by the Hartman Group and Food Marketing Institute during the early 2000s found that two-thirds of surveyed shoppers bought organically grown foods (see Recent Growth Patterns in the U.S. Organic Foods Market for a literature review of organic consumer studies).